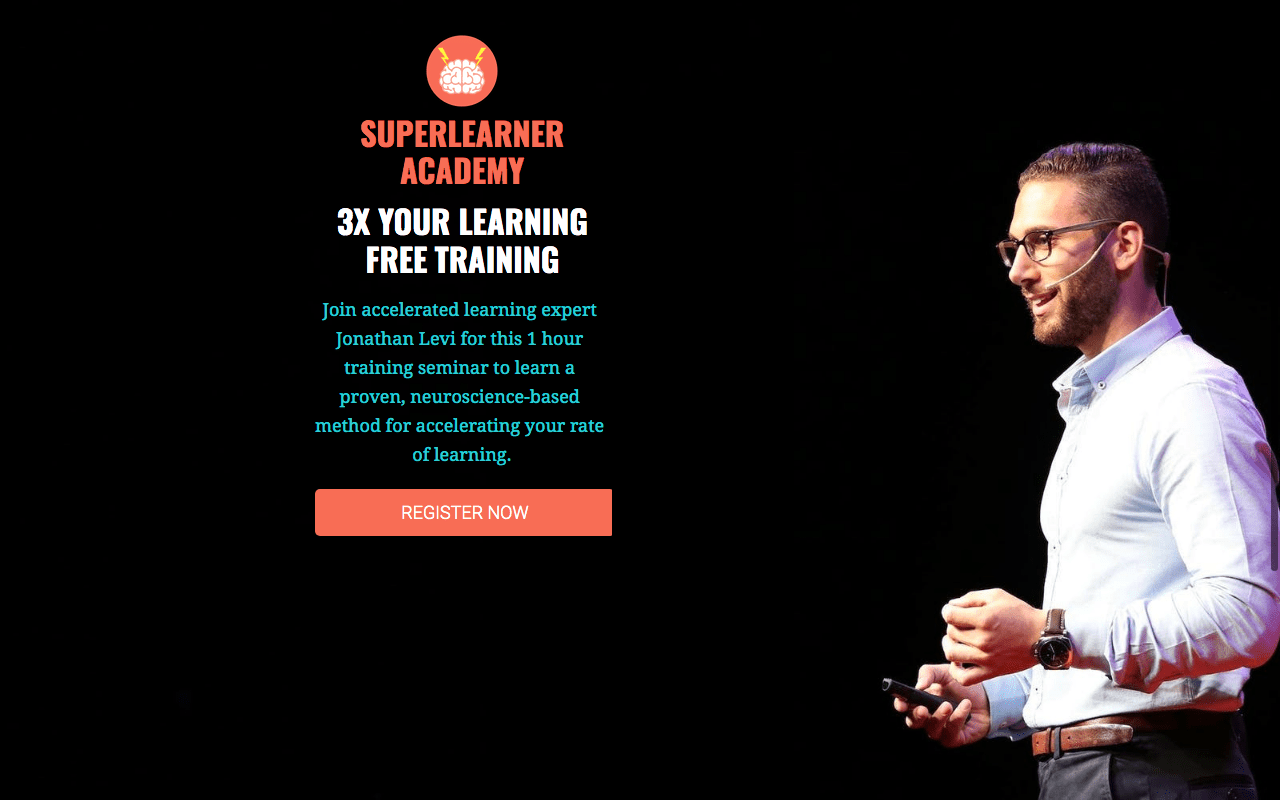 Become a Superlearner is an online course in speed reading, memory improvement and rapid learning skills.

The site gets traffic via the efforts of its founder – Jonathan Levi – who hosts a podcast, has a TED talk, and a published book that refers to the Mastermind course at becomeasuperlearner.com

The marketing had evolved organically and it has become harder and harder to see what activities were leading to any real results.

The business wanted to scale up but was nervous about moving into paid advertising channels without being able to measure ROI.

The Conversion Co. was initially brought in to clean up the email automation that Superhuman Enterprises had put in place themselves in ActiveCampaign.

The work we did to start with gave us a good chance to look at the funnel from end to end and to get some initial ideas of where the current sales were coming from.

The basis of the current funnels were:

The site had a lot of different lead magnets that had been set up over the years and we set about getting some hard data on:

a) Which of these were bringing in email leads.

b) Which of these leads were actually turning into sales.

Even with the best of the lead magnets we could see that the current funnel wasn't working well for products at a price much more than $50.

Quite quickly it became obvious that we needed a more impactful way of converting our email leads into customers.

Jonathan's smaller course was already a good seller on Udemy, but we weren't able to get email addresses of customers through that route.

We needed something to move people from “interested” to “take my money” much more effectively, but we also needed to build trust and authority with the audience.

This was a job for a webinar!

We created and recorded an-hour long webinar, and ran it live for the first few times until we had ironed out the script and seen a few sales.

Then we set it up to run one rolling schedule using EverWebinar.

Before long we were seeing sales from new email leads that convinced us we could move into cold traffic.

We tried sending traffic direct to the webinar registration, and also as the thank-you page after a few of the successful lead magnets, and (despite the advice from several “big name” marketers) we managed to make more sales off the simplest funnel.

Nevertheless we carried on and tested 5 different webinar scripts by the end of the year.

At this stage, much of the traffic was coming from Jonathan's podcast.

We wanted to create a landing page that would turn as much of our paid traffic into leads as possible.

We tried a few of the layouts provided by the webinar platform, but almost doubled the signup rate by testing our own layouts, images, headlines, and then finally an entirely separate landing page platform to give us a boost in speed.

No prospects left behind

When you plan a marketing funnel, it's tempting to look at a single ideal path from clicking an ad, through to the “Thanks for your order” page, but that only accounts for a tiny percentage of sales.

People sign up for webinars but don't show.
They drop out before they've seen the offer.
They get to the checkout and don't have their wallet with them.

Then life gets in the way, and you've lost them.

We wrote an extensive email series to pick up people at each of these drop-out points and managed to add 20% to our sales, before we even started to test new copy.

At the same time, we added retargeting ads on Facebook and Google to bring people back in to the fold, even when we didn't have their email addresses.

These ads eventually gave us the targeting data to turn on cold traffic – people who had never encountered the business before.

From there, with an offer we had confidence in, a funnel that had both the technology AND the psychology working, plus the data to tell us when we were reaching the limits of our audience, we were able to scale up traffic to 4-figure sums each day.

What most case studies don't tell you

Well, it never is, and if your supplier tells you it will be, they're either naive or lying.

Along the way we had to deal with:

Dealing with seasoned team means that these bumps in the road are uncomfortable, but not fatal.

We may not have faced your exact problems, but we have the experience of enough situations that are close enough to it that we won't throw our hands in the air and panic, even when world governments and the weather seem like they're conspiring against you.

By the end of 2 years of refinement and growth, we grew sales of the core Mastermind product to annual sales of over $3m.

From there Jonathan has been able to develop the customer base into other themes of productivity and high-performance that his podcast deals with, attract higher caliber guests, and create a virtuous circle of new people into his sphere of influence.

We started working with The Conversion Co. when sales from a major course marketplace tanked and we needed to focus on our own premium course offering.

Stephen instigated an entirely new customer journey, centred around a webinar, that was responsible for huge growth of the premium Masterclass product.

As well as his role in creating the new journey, Stephen’s knowledge of all aspects of digital marketing meant that he could liaise effectively with our ads teams across Facebook, YouTube and Google, with email copywriters and developers, and with more than 2 dozen technology providers, getting more out of each of these teams than we’d have been able to do alone.

Over the course of the project, sales went from around $7k per month to over $179k at their peak. More than $3 million in total.

With Stephen’s help, we’ve been able to serve more than 10,000 Superlearners in the last year alone, at a far deeper level than we were ever able to do with our marketplace products, as well as put us on the radar of a number of significant partnerships to further grow the business.

Could we do the same for you?

Get in touch if you think we could work together.