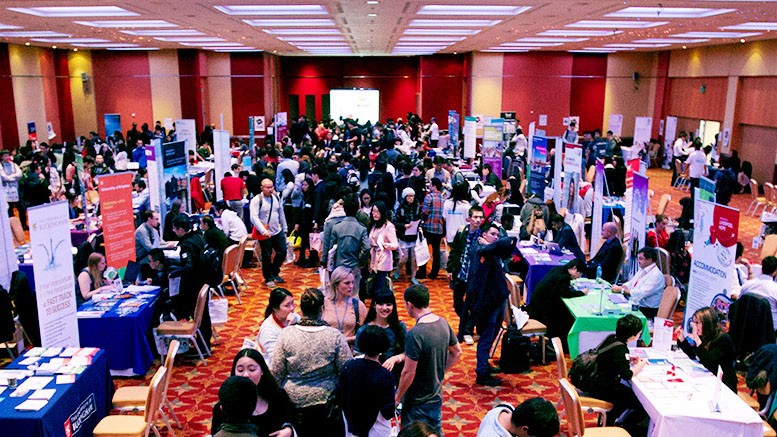 The event has a particular challenge as the international student population renews itself almost every year so relying on past visitors on;y brings a very small proportion of visits. We needed  to find ways of reaching this audience each and every year, but with little support from the universities themselves.

We worked closely with Chinese agency Emerging Communications on the campaign as a very high proportion of the students are Chinese. They provided support by posting on Chinese social media channels such as Weibo and WeChat.

We developed three marketing channels for students already residing in the UK:

We created campaigns in several languages including Cantonese, Mandarin and Arabic, as well as English and targeted people looking for particular universities and subjects such as student visas which indicated an interest in the topics of the show.

We ran tight local campaigns around London and areas with good transport links to the show, and tested several sets of keywords and advert texts to constantly improve the campaign performance.

As the show had no existing Facebook page or following we had to rely on pad ads in this channel.

We began by targeting UK resident students in different language groups and interest criteria related to the show.

We then created two “lookalike” audiences. One based on previous years visitors, then a new one as the campaign grew based on the current visitors. These turned out to be some of the best performing segments of the campaign.

Lastly we tracked and retargeted visitors to the website, pulling in a highly targetted audience to the campaign at minimal extra cost.

We didn't just retarget within Facebook. Our knowledge of the student market, backed up by stats as the campaign grew, showed that mobile was a far, far more important channel than is typical.

We added retargeting ads which appeared on popular mobile websites, as well as in mobile apps used by the site visitors.

In order to prove returns on the campaign, we worked closely with the fair's website developers to integrate the many sets of analytics and tracking code that were needed by the campaign.

From here we were able to see which channels were working best, and optimise the campaign as it progressed, particularly as we approached the final few days.

The campaign drove over 5,000 registrations, retaining the show's slot as the UK's largest international university fair.

We brought cost per acquisition from an initial cost of over £23 per lead, to under £4.

The tracking and campaign infrastructure we put in place also means we expect to drive even better results for successive UniFairs at a lower fixed cost in future.